For my first post I’d like to talk about small pets because I recently got a pet mouse. Growing up we had a number of small pets including a hamster, a few rats, and some birds. I have been craving that furry connection while at school and really wanted to get a rat again because they are excellent pets and are easy to care for. When telling people this I got a lot of “ew that’s gross” and “rats freak me out” and “why don’t you get a hamster?”

I am going to be honest here and say hamsters are terrible pets. After having one and hearing others stories about their experience with them I think I can say that. They are cute and fluffy, but they don’t want anything to do with you. Now I don’t know if it is the species itself that is like this or if the pet stores they grow up in isn’t giving them the support they need. Regardless if you get one from a pet store your hamster most likely won’t be that good of pet like everyone thinks they will. Which I think some people may not notice if they just keep getting them over and over, but after having a hamster and then a rat I can say that rats are much better companions.

Rats are not gross. They’re actually very clean little creatures. Much cleaner than my hamster was and the mouse I have now. If you show them love they will do the same in return. Both of my rats would cuddle with me and they never tried to run away or bite me. Rats love their owners similar to how dogs love their owners unlike hamsters. The only draw back to them is their short life span.

I’ve explained these points to many people over the years, but its fresh in my mind because of one of my roommates. When I sent pictures of my mouse Turnip to my roommates one of them said “no that’s gross” and “it better not bite me.” After giving my spiel like I did above I convinced her he was a sweet little mouse that would not even attempt to bite her. Now after meeting him she absolutely adores him. The point of this post is because I will always advocate for rats as pets and want the stigma around certain small pets to be diminished. 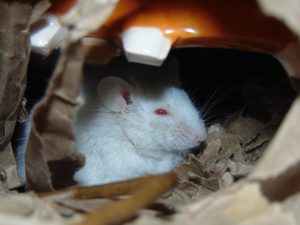