When I first started working with dogs I never expected all the humping I would see. I always thought they only humped when they were trying to mate, but I found out quickly they do it for a few different reasons.

I take groups of dogs out all together and a lot of humping attempts to goes on. Dogs will try to hump another to show dominance over each other. A mother and daughter dog duo come in regularly and the mom always humps her child to show her whose boss. However it can lead to fights so when I see it starting I always stop it early on. First sign is usually licking and or sniffing of another dogs genitals with buggy eyes and a tail going a mile a minute then mounting. It happens mostly with the younger dogs because the older ones try to show they are the alpha. Over stimulation can cause a dog to hump as well. Such as if they get too excited and they don’t know how to deal with their energy. That’s more when you see them just humping the air though.

It can be quite funny to witness because it’s not just the males who do it, female also try to hump other dogs. I find it particularly hilarious when a small dog is trying to mount a big dog. We like to say they have big dreams. A lot of the time too it can create humping trains where they are all trying to do it to each other. It is also really funny when the older dogs who can’t actually lift their front legs off the ground try to do it. They just stand next to their victim of choice thrusting the air without a care in the world.

Some do not quit either. They will keep trying no matter how many times I stop them. That is one annoying part because a dog will just be trying to have fun with the others and then this little bugger will not stop trying to hold them back (or by the back end I should say). Dogs can be trained not to do it, but it really has to be done when they’re puppies in order for it to stick. Most people think it’s funny (so they don’t correct it) or don’t even know that their dog does it until they are around another dog. I say keep on humping on dogs. 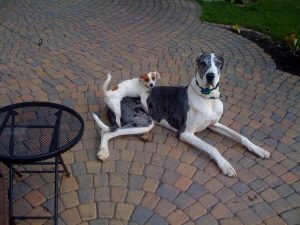